Wow…that’s really all I can say about Talladega.

Congratualations to my driver Tony Stewart for picking up his first win of 2008, his first win in #20 Home Depot Toyota (and yes I know it was Subway), and his first win at Talladega. Of course there is always a little controversy that surrounds Smoke. I have tried to keep a perspective about the whole yellow line thing because I guess I am a rules girl. NASCAR explained to the drivers on Sunday morning the rule about the yellow line. You can’t go below it…period. If a driver goes below the yellow line then they will suffer the consequences. And in this race fan’s opinion that’s what exactly happened on Sunday. I really don’t feel like debating the whole did Stewart push the #01 down below the yellow line. Regan Smith was there and he advanced his position. And in my eyes and NASCAR that was a big no-no. It was the green-white checker and Tony was leading. Tony was going to do everything in his power to win on Sunday. Tony was going to protect the bottom to prevent the others from getting a run. We have seen it time and time again at other tracks. Drivers do what they need to do to get the victory. That’s racing.

I have to say Carl Edwards went from “wow, what a great move” to “WTF just happened” in the matter of a 7 days. I know about 20 laps left at Talladega is when everyone turns it up a notch and Sunday was no exception. Carl basically took out two of his Roush teammates along with a few others including Dale Jr who was having a typical Talladega run. I have to say Carl did apologize causing the big one. Of course, with Carl and Greg involved in this crash, it helped out Jimmie. He left Talladega still with the points lead.

It was strange some teams were having tire issues. I don’t see Talladega as a track that will give the teams fits about tires. But as we all know tires have a mind of there own. They weren’t just getting cut, but exploding. Just ask Dale Jr., or Brian Vickers, or Denny Hamlin. In fact, he was taken to a local hospital after his crash at Talladega. When you slam into going that fast, even with all the safety measures in place, you are going to feel it.

Now that Talladega is out of the way, we can look to the remaining races. Next up Lowes, or as the race commentators say, Jimmie’s House. Oh and by the way, it’s on Saturday night! I love Saturday night racing.

Well, I am still recovering from my trip to Chicago. I have to say I had a wonderful time, but I don’t think I could live there. Too big of a city for me. However, I was able to experience ESPN Zone and all that it entails. I love ESPN Zone! I mean come on, you have a tv at any angle. While there my fellow co-worker and I were able to eat with Jeff Daniels. That’s right star of Dumb and Dumber was eating dinner at ESPN Zone with us. Ok…maybe he was three tables away, but we were there and he was there and we were eating dinner. So, in my world, we had dinner together. Of course I didn’t get a way with from the place without purchasing a few souvenirs. My favorite…a coffee mug with the following on it…”Yes, I am a woman, I know the game, I watch ESPN”. How can I not purchase this mug?

And we were able to get a bird’s eye view of Chicagoland Speedway. 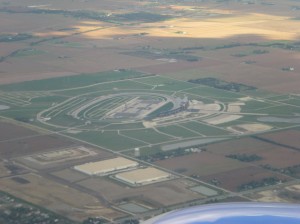 I was able to see Kansas Speedway, but did have the forethought to pull out the camera.

Sorry for interrupting the race post with my Chicago highlights, but it was a great trip and has refocused me with regards to my job as an advisor. In fact we will be making a few moves in the office and I will be able to get back to what I love–working with students. I work with students now, but not as many as I would like. This new change hopefully will get me out of that professional funk I have been in lately. And with that here are a couple highlights of my trip….