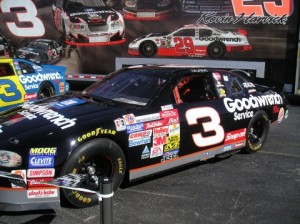 I still can remember when and where I heard the NASCAR family lost Dale Earnhardt Sr.  I was glued to every sports, race, and even news programs trying to make sense of all it.  Postman and I were married in June that same year.  Since we were staying at the Sahari in Vegas, we went down to the NASCAR Cafe.  In the gift shop located in the same area was one of Dale’s cars.  It was covered with cards, letters, and everything you could think of.  It was amazing.  I have a picture of it somewhere amongst my treasures from that trip.  Dale Sr. was missed by all.

There was no other driver like Dale Sr. and to be honest there will never be another one like him.  Dale Sr. was the man.  You don’t get to be a 7-Time Winston Cup Champion (that’s right I said Winston Cup) by sitting back and watching everyone else go by.  I still remember his first and only Daytona 500 win.  I cried right along with I am sure quite a few us in the NASCAR family.  For all the attempts and near misses, it was as if he was winning for us as well.  Little did we all realize that he would be gone in a few short years.

His memory is still alive and if you don’t believe me, look around the next NASCAR race you attend or watch on television.  He is still one of the most repsected drivers to ever race around the NASCAR circuit.

We miss you Dale!

One thought on “The Intimidator”