I have to admit I wasn’t looking forward to the Pocono race.  I am not a big fan of this race.  I guess because it can somtimes turn into a snoozefest, but yesterday wasn’t the case.  This race had a little bit of everything for everyone.

Yesterday’s race was the first broadcast for TNT.  TNT will broadcast the next 6 races up to the Brickyard where ESPN will take over the rest of the season.  Now I didn’t have any expectations for TNT.  I am not a fan of their broadcast, but you have to bear the good with the bad sometimes in life.  I have to admit I do like their Pride of NASCAR Series.  Yesterday’s installment was Bobby Allison.  It was a nice segment.  There were some audio issues during the race, but all in all not a bad broadcast.  One sticking point, I think they over did it a little with promos for The Bill Engvall Show, Saving Grace and my favorite of the TNT shows The Closer.  I am sure Fox does quite a few promos for their shows, but for some reason it felt like ever single time they went to commercial there was a promo.

Now onto the race…

Kasey Kahne was the man to beat yesterday.  He had the fast car and it showed even in the face of adversity.  Around lap 70ish, Kasey made a pit stop to get 2-tires.  I guess they didn’t let the crew guys in on this because they thought it was for 4 tires.  Kasey took off with only 3 lugnuts on and had to come back around to the pits.  This mistake put him back in the pack.  Luckily it was early on in the race so he had some time to make up the ground he had gained early on.  And sure enough there he was around lap 97, in about 7th place. That right they my friends tells you what a good car Mr. Kahne had.  Congratulations to Kasey Kahne for winning his second race in his last 3 races and he did it from the pole.  As I recall in 2006, Kasey liked to start on the pole and go to victory lane.  I think if it weren’t for a early crash last week at Dover Kasey would have been a contender.

Kyle Busch the points leader took a big hit yesterday in the standings with his 43rd place finish.  Sunday was the third leg of his “Bermuda Triangle” trek to three different race tracks.  He made history by doing this trifecta, however it didn’t yield any wins.  His best finish in the three races was at Texas with a 2nd place finish in the truck race Friday night.  Yesterday’s mishap I don’t believe was a result of all that traveling, I just think it was one  of those too many cars not enough real estate things.  We can’t also forget Kyle was also at Eldora Wednesday night for The Prelude.  I am sure Kyle is catching up on all that sleep he missed over the weekend.  I for one I’m tired just thinking about all that mileage.  Of course he got to travel with style…it’s not like he had to fly Southwest Airlines to all the destinations.

Now there were lots of drivers who had fantastic days, Brian Vickers (2nd), Bobby Labonte (11th), A.J. Allmendinger (12th).  Kudos to both Kurt Busch and Kevin Harvick for their finishes of 8th and 13th respectively.  Kurt spun and had damaged to his splitter, but was able to come back and race his way to a top ten finish.  Same thing for Kevin, he had to start the race at the back of the pack right before the race started due to a battery change.    Greg Biffle looked like he was going to have a great day at Pocono (just like Tony), but he too got nailed for a late speeding penalty which ultimately ruined his good run.  He did however finish 15th which was way better than Smoke. 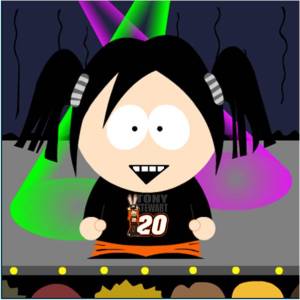 Now a few words about Smoke.  Once again,  Tony had a car that could win the race.  In fact he was up front leading everyone for a time and I thought this might be the race he would see his first win of the season.  But alas, it was not to be on Sunday.  He was nailed with a late speeding penalty and ended up back in the pack.  He finished 35th.  Guess who finished in front of Tony?  The #19.  Perhaps that was why Tony got caught speeding, he saw Elliott coming and wanted to get way ahead of him–just kidding to all you Sadler fans out there.  UGH!  What does this Stewart fan have to do to get the mojo workin’ for Smoke?  Maybe he just wanted to have his first win of the season in Michigan this week.  I mean talk about a great birthday present!  How ’bout Smoke?  Win one for Trixie!

2 thoughts on “A Sunday Drive”