Just a few notes from The Park….

The Cup boys are back at The Bermuda Triangle aka Pocono this weekend.  Pocono is one of those races that I usually have on in the background while I am cleaning house.  I am not a fan of races at Pocono.  For one thing if the field gets spread out, then it makes for a boring race.  However, after last weekend’s “race”, I am looking forward to some decent racing.  I was happy to see NASCAR apologize for the weekend.  Poco

NASCAR announced this week, the Nationwide Series will not be running in Mexico next year.  The series raced in Mexico the last 4 seasons.  This announcement does not surprise me however.  This race saw lagging interest and what had to be the biggest logistical nightmare for many of the teams.  However, NASCAR was able to expose their sport to a new audience and I hope build a bigger fan base.

Jimmie Johnson will make his Truck series debut on August 5 at Bristol driving the #81 for Randy Moss Motorsports.  When I first heard that Randy Moss was going to delve into the world of NASCAR I was a little skeptical.  And my skepticism does not have to do with the fact that I am not a fan of Randy Moss, it has to do with the history.  Several others from the world of NFL have tried to venture into NASCAR and have not been successful (excluding Joe Gibbs).  There was Terry Bradshaw who has come and go as well as two hall of fame quarterbacks from the Dallas Cowboys (Staubach and Aikman).  I don’t know a whole lot about Bradshaws venture, but with Hall of Fame, they were trying to start out in Cup immediately.  Perhaps Randy has his eye eventually fielding a team in Cup, but starting out in Truck is a smart move.  Plus to have two-time Cup champion Jimmie Johnson to drive your truck isn’t  too bad either.  It will give RMM a big step towards legitamacy into Truck.

Best kept secret alert…Ryan Newman will drive the #4 for Stewart Haas Racing next year.  But don’t tell anyone.

And one final note…HAPPY BIRTHDAY TO MTV!.  It was 27 years ago today (August 1, 1981), MTV made it’s debut into homes across America.  I was only…11 years old.  I still remember coming home every day from school and tuning into see the latest music videos.  I wanted my MTV.  I watch MTV now and I can’t even recognize it now.  I really wish they would go back to a more music video format, but hey a girl can dream can’t she. 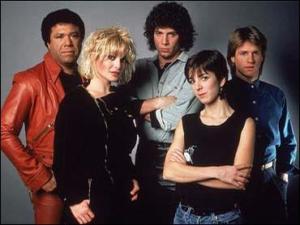 In case you are wondering what the first video was MTV played…here it is.

One thought on “Pocono and MTV”