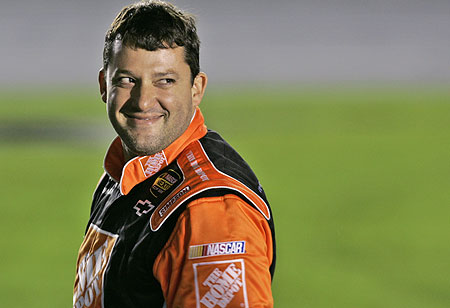 I can’t believe tomorrow will be the last time Tony will get behind the wheel of the #20 Home Depot car. All of us Stewart fans knew this was coming at the end of the season and I think we are pretty much prepared, but it is still going to be hard. It’s going to be somewhat strange to see another driver in the #20. For ten years we have watched Tony mature into one of the top drivers in NASCAR. He has 33 wins, 129 Top 5, 206 Top 10 with an average finish of 12.7 and an average points position of 4.88. And we mustn’t forget those two championships in 2002 and 2005. Tomorrow will also end the longest driver/crew chief duo as Tony and Zippy say goodbye to one another. It will be an emotional day for the whole #20 team as well as Joe Gibbs racing.

I am looking forward to the 2009 season and Tony’s next chapter in NASCAR.  It’s going to be nice to see Tony back in a Chevy and racing under his own terms.  It’s going to be interesting to see how Darian and Tony will interact. Ah…to be on the team channel next year.  I may have to get Direct TV after all just so that I can listen to the driver to crew chief chatter.  I have always said Tony could driver just anything he gets behind the wheel of…so next year will be the most exciting in a long time for us Smoke fans.  I am going out on limb and say Tony will make the Chase next year.  This change will, in my opinion, put fire in his belly and we will see Tony standing in victory lane more often than we did this year.

I am not sure about the ban on testing for the 2009 season.  I haven’t had a chance to read the articles about it.  I have been trying to get through all this adoption stuff the last couple of days.   I am still thinking about it all.  As I mentioned a few weeks ago, I am in the middle of working on the 2008 Trixies.  I try to post them during Championship or shortly thereafter.  It all depends on what is going on in The Park.  But don’t worry I will get them posted.

For those friends and family I have neglected and/or ignored the past 9 months, you now have my undivided attention.  The NASCAR season will be officially over tomorrow evening.  I now have some time in my schedule, well until February.  Usually it was until January, but with this ban on testing, January has now opened up for functions and parties.  I know for some us we mark off our calendars until the Daytona 500 and we try to find that replacement for our NASCAR until the season begins.  I can focus on football until the green flag flies for the 2009 Daytona 500.