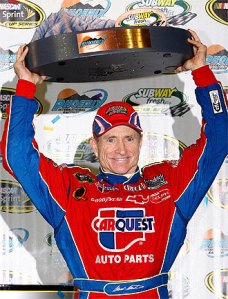 Wow! That was some fine racing last night in the desert by one Mark Martin. First he decides to come out of semi-retirement to drive the #5 for Hendrick Motorsports. He then goes on to win 3 poles (Atlanta, Bristol, Phoenix). He started off the season after Daytona 15th in the standings. He fell near the danger zone in 34th after Atlanta, but after Bristol, he has steadily moved up in the standings and now sits in 13th just 9 points behind former Roush teammate Matt Kenseth. Even though I wanted Tony to capture his first win under Stewart Haas Racing, I was excited about Mark Martin’s victory.

I do have to say there was quite a bit of respect for Mr. Martin last night from teammates, fellow competitors, but most of all his former boss Mr. Jack Roush when they all came over to congratulate Mark in Victory Lane. I hadn’t seen something like that since Dale Sr. won his only Daytona 500. I like Mark Martin. He is always the first to say thank to his crew, thank to the fans, and he appreciates everything he has with regards to NASCAR.

I was excited to see Tony having a good night. His first victory of the year is so close we can all feel it. At Texas, Jeff Gordon broke his winless streak, last night Mark Martin broke his, perhaps next week at Talladega the #14 can get that first victory with SHR. He finished 3rd at Martinsville, 4th at Texas, and 2nd last night. It looks good for Talladega. I know Tony wanted to win last night, but I don’t think he minded that he was 2nd to Mark Martin. And like Mark Martin mentioned in Victory Lane, “Tony would have raced me clean, but he would have raced him crazy.” That about sums it from Phoenix folks.