Last post I wrote about NASCAR, I wondered what has gone wrong with the #14 team so far this year.  I am hoping it is just something they haven’t figured out with this new Gen-6 car.  I didn’t watch much of the Kansas race due to the onslaught of out of control weeds in my back yard.  But every time I would pop in during the race Tony was racing between 19-22 place.  I mean it didn’t matter when I came in there he was stuck in that zone.  This is the zone his team has been the last several weeks with his car.  Could it be more than just missing the set up on the car?  Could SHR be stretched too thin with three teams to take care of each week?  Sometimes more doesn’t mean better.  I think if SHR can get Tony’s team on track the other two will fall into place.  I just don’t know any more.

Congratulations to Matt Kenseth for winning Kansas.  He is the third driver in a row to win from the pole position.  I have to say the move from Roush Racing to Joe Gibbs has been a positive move for him.  Sometimes changing jobs can make such a huge difference.  Matt, along with Jimmie and Kyle have two wins this season.  Matt is one of those drivers that tends to quiet but deadly.  At times you say to yourself, where did he come from?  I think he is going to be a force during the rest of the season.

Sorry for not writing too much about NASCAR with this post.  Last weeks’ events in Boston and West have had the country engrossed in news outlets for hours at a time.  This includes me.  I found myself watching things unfold on Monday with the bombings in Boston, through Friday when they were able to apprehend the second suspect in the bombings.  I am proud of the law enforcement entities involved in the bringing this manhunt to a conclusion.  Even though I was saddened by the events in Boston, my heart is with the residents of West, Texas.  I am so proud of my state for banding together to support this town of roughly 2700 people.  If you haven’t been through Texas, you can’t understand the vastness of the state.  We are the 2nd largest state in the union.  You can travel all day and never get out of the state.  It takes about 12 hours to bet from my home in Lubbock, Texas (located in the northern part of the state or square part as some have told me) to the Weslaco which is located near the border of Mexico.  It is closer to Los Angeles from El Paso than El Paso to Beaumont.  In this vastness there are many tiny towns and communities many have never heard of.  West, Texas is just one of those outside of Texas you did know existed until Wednesday night.  I have told people about West and they think I am talking about the West Texas region.  This is a mistake.  I would have to clarify by saying West comma Texas.  I do not have to do this any more.  When traveling in the state Texans think about how long it will take not in miles.  But despite all of this Texas has never been so close.  I am so proud of my fellow Texans for banding together to help the city of West and its citizens to try to recover from this horrific event.  If you are in the Waco area, there will be a memorial for the fallen firefighters and EMTs at the Ferrell Center located on the Baylor University campus.  If you can take time out your day to pay tribute, please do so.  These men were heading into the fire while others were running away from the fire.  The memorial service will be held at 2:00 pm.  I wish I could be there, but even though I can’t I will be thinking about these first responders and their families. God Bless. 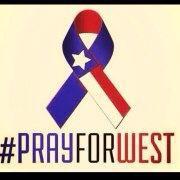