While preparing my famous layer dip for a co-worker’s birthday party on Friday, I heard a knock on the door. I was trying to figure out who was at the door. One it was about 7:30 at night and I knew with all the torrential rains you had to be crazy. Postman answered the door and it was the UPS guy. I had received a box from 1-800-flowers. Who could sent me this lovely surprise? Perhaps a secret admirer…or someone in my family. Postman told me it wasn’t him. So who could have been this thoughtful person? It wasn’t my birthday (that’s in June) or my anniversary (that’s also in June)…so what was the occasion? As I opened up the card, this is what I read…

Ms. Advisor…Thank you for helping my daughter to graduate in December 2008. We really appreciate you taking the time to help. Sincerely, Father of student and student.

This was definite surprise!  I have never had a parent or student thank me in such a way.  I have received numerous emails as well as phone calls thanking for my help, but nothing like this has happened.  Without going into too much, I worked my little tookis off and went beyond that extra mile for my student.  This makes all those crazy, stressful days at work worth every minute of it. 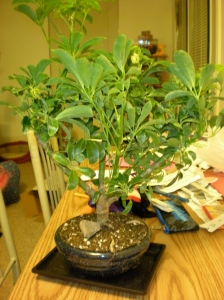 And one more thing…here are some photos from around Raiderland after all the rains stopped. I just can’t believe the amount of rain we received yesterday. It’s some crazy stuff!

I think I saw Noah heading into Home Depot this evening.  It kind of looked like him, I mean people were following him two by two. Raiderland has received, at the time of this post, about 6.5-7.5 inches of rain and we are expecting several more inches over the next few days.  In fact Little Smoke’s school district will be closed tomorrow due to all this rain we have received today. I used to always wonder how in the world land locked areas flood, well now I know.  Hopefully Noah has some room because if these remnants of Tropical Storm Lowell keeps hanging around I may have to get on board.

UPDATE:  Still haven’t seen Noah sitting out in front of my house, but I do not have to go to work due to the waters.  Classes were cancelled and only essential personnel are to report.  As much as I would lovvvvveeeee to be considered essential, I am not.  WOO HOO RAIN DAY, not exciting as a SNOW DAY, but hey I get to have a day off.