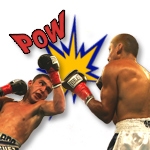 In this corner: Carl Edwards

In the other corner: Kevin Harvick

All I have to say is NASCAR is about passion and that is what these two drivers have–Passion. This will probably be another “much ado about nothing” after this weekend. If you are a reader of The Park you know who I would root for in this tete-a-tete.  It’s weird how most of the season the talk has been about Kyle Busch and his attitude/antics and now…well, let’s just say there hasn’t been much discussion about Rowdy.  But like with anything, the more things change the more the stay the same

Looks like qualifying has been rained out and thus the points were set by the standings. That means Jimmie is on the pole once again. Lowe’s is Jimmie’s track. He has 5 wins at the track and even if he doesn’t win, he is always a threat at Lowe’s.

Stewart Haas Racing has announced that Army will be the sponsor of Ryan Newman and the #39 car in 2009.