Disclaimer…I am apologizing to all of these out there who have math phobias for my usage of math lingo in this post.  Sometimes my geekiness just can’t help itself.  I hope I have done my math teachers proud by the use of this math terminology!

A usual NASCAR race occurs on an oval track which gives us four turns of action.  But there are on a few occasions where NASCAR takes their show to the not so oval tracks.  This weekend the Cup drivers will tackle Pocono Raceway aka The Tricky Triangle in Long Pond Pennsylvania for the Party in the Poconos 400 sponsored by Walmart.

To be honest, I don’t know a whole lot about this track.  The only thing I know it is in the shape of a triangle, albeit a rounded triangle.  I still shudder and get chills every time I think about triangles.  I think this all goes back to one of junior high math classes where I had to memorize the Pythagorean Theorem (note…I still can recite it word for word…the square of the hypotenuse is equal to the sum of the squares of the other two sides).  Hopefully the drivers and crew chiefs won’t have to use that kind of math to get around the 2.5 mile triangle this weekend.

I can see how the track is called the Tricky Triangle.  None of the sides are the same length or in math lingo a scalene triangle.  So no chance of using that pesky Pythagorean Theorem I mentioned earlier because you need a right angle in the triangle to use this theorem.  Can you imagine if one of the turns was a right angle?  Any way, here are the specs for the triangle the drivers will have to contend with this weekend.

There is much in the way of banking like there is say at Daytona or Talladega.  This is a flat race track which requires the drives to contend with very different corners and straightaways.  Currently, there is one driver who seems to have mastered the domain of Pocono Speedway.  Jeff Gordon has the most wins with 6.  His last win coming last year at the Pennsylvania 500.  He has also lead the most career laps at Pocono with 965.  So if you have a fantasy league, I would definitely put Jeff Gordon on the team this week.  Another driver who has some success at Pocono is Denny Hamlin with three wins.  He swept both races back in 2006.  If Denny is looking to bounce back from last week’s race, this would be the one race to do it.

I will be watching Tony Stewart this week.  After his win last week at Dover, and his top-10 finish at Charlotte, he is riding some momentum into Pocono this weekend.  Tony’s win at Pocono was in 2009 at the first race in Pocono.  I have been following Tony’s career for several years and this is the time of the year he gets things started.  I am hoping he take this momentum to Victory Lane and get his second win of the season!

If you are headed out to Pocono this weekend have a great time!  If you are thinking about taking in the race, but don’t want to spend too much of that budget, you can still purchase concourse level tickets for just $25!  That’s right…$25!  These tickets normally would sell for $55, $50, $45.  That’s quite a deal when you think about it!  It basically means you can get two tickets for the price of one.  If I had that kind of savings, it would mean I could buy another Tony Stewart souvenir for my already overflowing souvenir collection!  You can buy these great tickets online at http://www.walmart.com/cp/1091705 or Pocono Raceway

When I started researching things about Pocono Raceway I wasn’t sure what I was going to find.  I wasn’t familiar with the track and to be honest it usually isn’t one of the races I have circled on my calendar to watch.  It’s not because there isn’t exciting racing, it’s usually the fact that I am on vacation during this time and don’t get a chance to watch the race. You need to check out the Pocono Green Initiatives!  The one program I like is the NASCAR Clean Air Tree Planting Program.  Ten trees are planted for every green flag of NASCAR race at Pocono.  Ten trees per race that’s twenty trees a year!  Pocono is definitely leading the way in conservation in NASCAR! 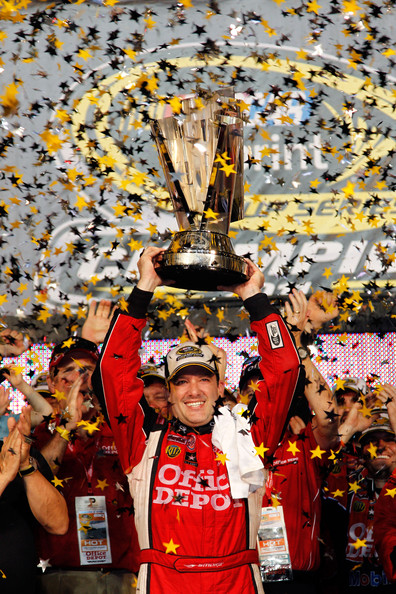