I was already to go for the race last Sunday.  For the first I was pumped up for a Pocono race.  Of course, it helped that my driver won the week before race.  I just had this feeling about Tony that he would have a good weekend.  Thanks to Mother Nature, qualifying for the race was rained and the field set according to points standing.  This meant Tony would be starting mid-pack.  I wasn’t worried though.  Tony has a history of not lighting up qualifying.  It doesn’t matter where you start, it is where you end up that counts!

Of course, with qualifying being rained out this meant Jimmie Johnson, aka 5-time, was 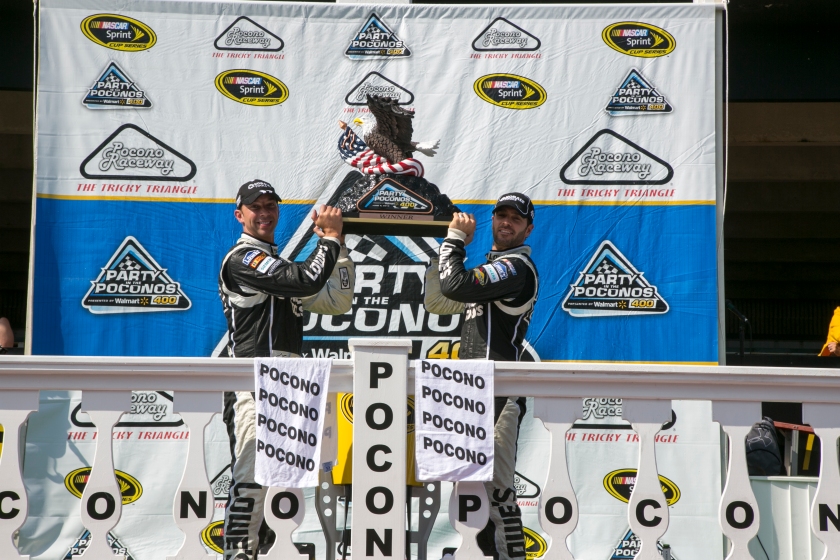 starting on the pole.  This doesn’t always bode well with the other 42 competitors.  When Jimmie gets out in front and takes control of a race, well, it makes for a long day for the those who aren’t Jimmie fans.  I think Jimmie wanted to win this race and in a dominate way.  He felt cheated after last week’s race at Dover.  When Jimmie has a chip on his shoulder watch out!  And that was the case on Sunday.  I started watching the race and Jimmie took command of the race.  Then for some reason, my body chose to take a nap.  I woke up with right before the 2nd caution of the race.  I guess I didn’t miss much in between because one there had only been one caution, and two, Jimmie was still in the lead.  And that is pretty much how it ended.  Congratulations to Jimmie for his third win of the season.  He is now tied with Matt Kenseth for the most wins so far this season.  He still has the points lead folks.  But does it matter that he has the points lead now?  Nope.  Everything resets for the final 10 races.  There is still quite a bit of racing until Richmond! This was the third week in a row, Tony finished inside the top 10 with a 4th place finish.  I am telling you guys do not mess with the mojo I have going on with the #14 team.  Once again, I didn’t watch the entire race AND I posted a picture of Tony with his championship trophy from 2011.  I am so proud of the #14 team.  They have jumped up 7 spots in the last three weeks from 20th to 13th!  If they continue the move up the points standings, Tony will be in the top 10 before you know it.  I still think he needs at least one more win to secure himself in The Chase.  Tony seems to be on the upswing compared to the first part of the season.  So without further ado and to keep the mojo going…

Some thoughts from the weekend…